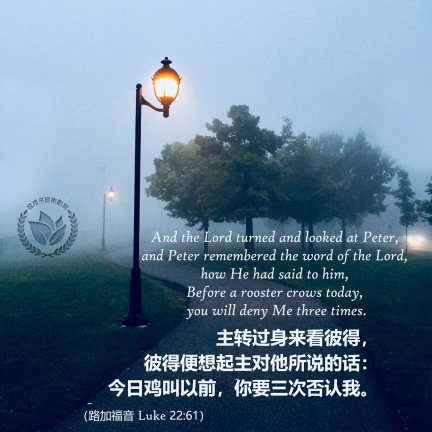 Communication is a big issue. We have to look at  examples in the Bible to see how our God, our Lord, communicates with people.  The first example we will look at is in Genesis 3. After man fell and sinned, man hid himself from the face of Jehovah. Jehovah God did not condemn or judge him, but sought him and called him, saying, “Where are you?…Who told you? Could it be?”—Gen. 3:8-13. This example shows us that when God communicates with a sinful and fallen man, He does not condemn man directly, but comes to question him first.  He lets him tell the whole story himself and lets him confess his own transgressions.

The second example we will look at is in John 21, where the Lord Jesus came to Peter while he was fishing.  How did the Lord communicate with Peter?  Before the Lord’s crucifixion, Peter denied the Lord three times (Mt. 26:33-35). But after His resurrection, he came to them, filled them with a full load of fish, and prepared food for them. The first words Jesus spoke to them were, “Children, have you any fish to eat?” Can we, as parents, be like Jesus? Can we treat our children the way Jesus treated His disciples who denied Him? When they had finished their breakfast, Jesus said to Simon Peter, “Simon, son of John, do you love me more than these?” (v. 15-17)  This is how the Lord Jesus communicated with His fallen, denying disciples. He first showed concern, then greeted and cared for them, then He cherished them and cared for their practical needs, and finally, He reminded them of and restored their love for Him.

Although our Lord and our God is full of feeling, and speaking concerning His children, the ones He loves, He does not immediately confront them, but first, listens and asks so that His children will be open to Him.  When Jesus communicated with people, He first asked with His mouth, and then listened with His ears, so that they might be fully opened to Him by answering His questions. It was then that He began to speak what He wanted to say to people or to do what He wanted to do in His heart for them. But He did not begin by saying or doing all that He wanted to say and to do in His heart.

John 4 records that the Lord Jesus spoke with the Samaritan woman who came to fetch water. His purpose was to give the Samaritan woman living water to drink. In order to provide for the woman’s needs, Jesus first stated His own needs. The secret of the Lord’s communication here is to open Himself up first by asking questions, sharing His needs, and giving the opportunity for others to be open, too. If you read the Bible carefully, you will find that the Lord Jesus began His communication with people by asking them questions and listening to their answers, thereby opening them up to Himself.  From there, He began to speak to them about His burdens and what was on His mind.

Not only did the Lord Jesus communicate in this way, but Paul did as well.  Second Thessalonians is Paul’s second epistle to the church in Thessalonica, which was a very new and young church. In this epistle, Paul approvingly points out their progress saying, “Because your faith grows exceedingly and the love of each one of you all to one another is increasing.”

Consider the responses of both Jesus and Paul when your child is having a problem or difficult time.  Before you point out your child’s problem or difficult time, why not identify one or two of his/her strengths, or maybe acknowledge his/her progress first instead?  Talk about what your child has improved on recently, acknowledge his/her progress, and give him/her encouragement and recognition first. Avoid bringing up the negative sides of the child bluntly, which hinders the child from communicating any further. We need to carefully study Paul’s Epistles and the Lord’s communications in the Gospels to find more.

The first thing we have to learn in communicating with people is to listen – be quick to hear, slow to speak, slow to wrath (Acts 1:19).  Don’t be so quick to wrath and speak, but ask and inquire first,  understand what is on one’s mind, and listen to what one’s problem is. Why do people have two ears but only one mouth? We are told to listen more and to talk less, but this is so hard for parents!

Before we communicate with our children, can we first fellowship with the Lord, pray, stay in His presence, and think about what to say to our children?  Before we point out their problems, can we first point out their progress and tell them the points that deserve to be affirmed so that their hearts can be opened to share with us when we ask them to tell us their problems?  Once they share the problem with us, the problem is almost solved and we don’t need to point it out again.  These are  things we need to learn.